How long have you been involved in retraining racehorses? Our family have been retraining racehorses for over twenty years. My uncle Jim Dreaper had retired Harcon who had had notable success for Jim over the years. He retired a sound horse and Jim felt he would have been bored in retirement so my brother Michael took him and had years of fun doing Pony Club back in the 1990’s. That’s was the start of it and over the years we have had some really lovely racehorses all of which we have managed to find their niche and they have gone on to be Eventers, show horses, Polo ponies and one went Western Riding. It just goes to show the versatility of the Thoroughbred as a breed.

Tell us about your horse?  The horse which I have probably had most success on is Forpadydeplasterer – In 2008 he won the Deloitte Novice Chase and the following year won the Arkle Challenge Trophy at the Cheltenham Festival 2009. He also finished second to Big Zeb in the 2010 Queen Mother Champion Chase. He was bred by John Broderick, owned by the Goat Racing Syndicate and trained by Tralee native Tom Cooper; Father of Bryan Cooper. He ran 32 times, finished 1st 6 times, 2nd 14 times and 3rd three times.

When did you get him and how did it come about?  I got a phone call from Tom Cooper one evening out of the blue to say they were going to Pady as they felt he had given everything he had to the sport and was time to retire him fit and well at the age of 12. I had previously campaigned Cooldine that summer, a former Willie Mullins trained horse but unfortunately, he suffered a bout of colic in the Autumn and had to be put down. The phone call came at the right time as Tom put me through a strict interview as to what I would be doing with him, where he would be going etc. It would be easier to date his son I can imagine than take the horse! I collected ‘Pady’ at Naas racecourse at the start of February 2014 and the retraining process began!

How long did you have him before starting to compete?  I had him for three months before he went to his first competition. He has a great brain and I felt he was ready for it. When I had Cooldine he didn’t make his first outing for 8 months so its best to figure them out and work out what is best for them and not to rush them or its no fun for anyone!

Explain your initial retraining experience?  The first couple of months were slow but it was purely Pady getting to know me and adapt to his new routine, Pady was ‘racing fit’ when he came to me so he had plenty of down time in the field, I got his back done, teeth done, I got a feed company in to change his diet and got a saddle fitter out to fit his new GP saddle to him. I didn’t want to start the retraining process with any niggles.  Thoroughbreds are extremely intelligent and thrive on work and learning and Pady is a prime example of this. Pady is now 18 and he is teaching the ropes to some of the younger generation.

Biggest Achievement? Without doubt winning the RDS Racehorse to Riding Horse Class for three years on the trot. He went to Aintree to the ROR National Championship Show and won the Hunter class there also. He won the ITBA Racehorse to Riding Horse class at Balmoral Show last year and to show he is not a one trick pony he has won Side Saddle classes and last year and was one of the finalists in the Young Breeders Final at the Ploughing Championships.

Does he have any funny habits?Pady is really a horse of a lifetime for me. His quirky little traits are what I love about him most.  He hates being kept in so in the morning I open his door and he makes his own way in and out of the paddock….which is about 200 metres away! He will only eat Pink Lady apples and grunts at you if he is grumpy, which is very rare! He has the kindest soul and for a horse standing over 17hh he will let the smallest of children ride him and he minds them.

Any advice for someone looking to rehome an ex-racehorse?  If you are not experienced in thoroughbreds bring someone along with you that is, not all TBs are suitable for retraining. Temperament is key as is their soundness. Some TB’s may retire sound, others may retire through injury. You need to make sure whatever horse you get will stand up to the level of training you wish to do. Some horses can’t take to the atmosphere and think every time they land at a show they are going to the racecourse. Get plenty of outings to quiet shows, the beach, even a friend’s house just so they eventually realise their racing days are behind them.  Keep the retraining simple at the start and don’t get frustrated if they don’t pick it up the first time; they will and will reward you with plenty of great days out thereafter. 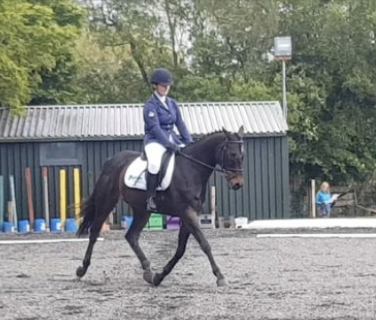